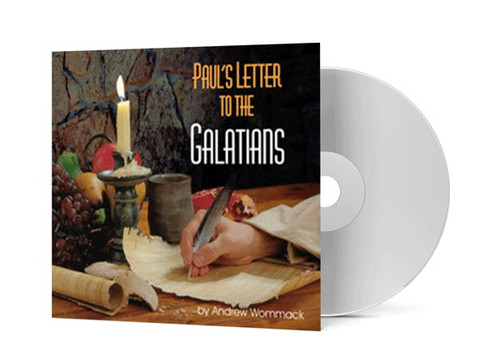 This album is a verse-by-verse study of the book of Galatians. Paul pulled no punches in this letter to the Galatian Christians as he countered the legalism that was stealing their pure faith. This epistle presents the same great truths of grace that were so masterfully presented in the book of Romans, but Paul used an in-your-face approach with the Galatians. The time for being nice was over; these people were in danger of losing their faith! Paul let them have it. Some of us need this same tough-love approach. We have yet to receive the full understanding of unconditional grace, and the shock treatment is the only alternative. This study of the book of Galatians is both shocking and liberating.

Galatians is a letter that Paul wrote to Christians for leaving the basic Gospel message and going back to the bondage of the Old Testament Law. This message is just as timely today as when Paul wrote it nearly 2,000 years ago.Many Christians receive salvation by putting their total faith in Jesus. After being born-again, they fall back into the same old habits of thinking God accepts them based upon their performance. Paul described this in his letter to the Galatians by saying, "O foolish Galatians, who hath bewitched you . . . are ye so foolish? having begun in the Spirit, are ye now made perfect by the flesh?"In other letters, Paul expounded these truths in a gentle, uplifting way. But in this letter to the Galatians, Paul is brutal. He begins with a curse against anyone, even an angel, that would change the Gospel he had preached. He pulls no punches and leaves no room for compromise when it comes to the good news of salvation by faith in God's grace alone.The modern church has moved away from total faith in Jesus Christ to preaching a performance-based message that leaves the hearers frustrated and condemned (Gal. 5:2-4).The hard-hitting style of Galatians is just the thing for removing the blindness that has kept us from experiencing the fullness of God in our lives. You will understand the grace and love of God as never before through this study of Paul's letter to the Galatians.

CD's in this Album include: